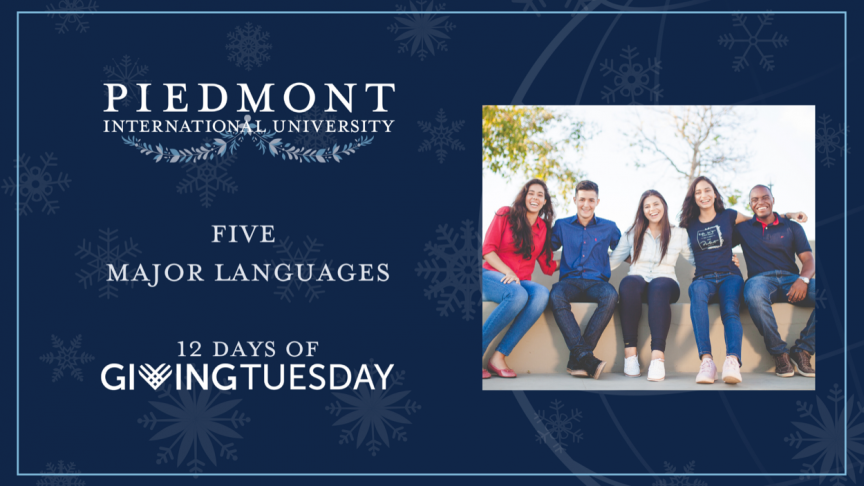 On the fifth day of Giving Tuesday my Piedmont shared with me FIVE major languages.

Over the past twenty years, Piedmont has offered entire degree programs in English, Arabic, and Spanish. Translating entire degrees into other languages is easier said than done, but the impact of training key national leaders is among the most strategic endeavors being accomplished today for world evangelism. Piedmont’s influence across the Middle East and the Spanish speaking world is being told through thousands of stories of those reached by our graduates who enjoyed earning reputable degrees without having to learn another language.

In 2019 we enrolled our first students in a master’s degree that is currently being translated into Portuguese. We were blessed to add Andre Taveres to the PIU team who moved from Brazil to Winston Salem to oversee the translation, cultural adaptation, and marketing of a master’s degree in ministry into Portuguese to be delivered entirely online. He recently said, “It is so exciting to be a part of PIU and its view of reaching students internationally. Providing biblical resources and equipping people around the world will enable Christians from any country to biblically reproduce Christ in the lives of others. That is what this school is all about, true discipleship. We have currently enrolled in the Portuguese M.A. in Ministry, students from Brazil, USA, Angola, and in spring 2020, students from Portugal. One of our Fall 2019 undergraduate students shared this testimony which I thought was very interesting: ‘When looking at coming to PIU, one of the first things that caught my eye was the fact that they had a Portuguese Program. I thought that was really interesting, but then when I did more research, I found that Piedmont was a smaller school and that made the Portuguese program that much more impressive. This ministry goes beyond just America into other nations which is exactly what Jesus commands us to do, to go into all nations and I love the fact that Piedmont is reaching out into other nations so that the people in those nations are equipped to bring the gospel to more people. It really surprises me that this program belongs to a small school, but it is really uplifting to see that even though it is a small school it can do great things to expand God’s Word.’”

Piedmont was blessed to add Dr. Shannan Warden to the team to oversee the launch of a school of counseling and the launch of our fifth major language translation; this time into Chinese. Dr. Warden has a PhD in Counseling and Counselor Education from the University of North Carolina at Greensboro and comes to PIU from Wake Forest University to lead the development of a Masters Degree in Counseling. She has counseled in local church ministries and co-authored several books with Dr. Gary Chapman including The DIY Guide to Building a Family that Lasts: 12 Tools for Improving Your Home Life and Things I Wish I’d Known Before We Became Parents.

She recently said, “In partnership with Dr. Gary Chapman and Moody Publishers, Piedmont International University is developing a Massive Open Online Course (MOOC) for delivery in China. Courses such as this are typically low-cost, personal growth courses rather than heavily academic courses, and they serve as a great way of reaching and equipping people who might not otherwise have access to needed resources. Following their research of existing needs in China, Dr. Petitt, Dr. Ashburn, and other PIU leaders determined that China lacks marriage and family counseling and counseling-related resources.  To help fill some of those needs as well as extend the University’s international presence, PIU sought help from long-time supporter, Dr. Chapman, and his publisher, Moody Publishers, to help with the development of a MOOC that will feature Dr. Chapman’s teachings on marriage and family. Development of the MOOC is underway and is slated for delivery in 2019. If all goes well, this will be the first of many MOOCs that will be offered in China and elsewhere over the next several years.”

We are excited to announce that Dr. Joe Jordan recently joined the PIU team. Years ago, he founded Word of Life Argentina and later became Executive Director of Word of Life International. The school in Argentina has enjoyed unparalleled impact and influence across the Spanish speaking world and has graduated some 13,000 alumni. Dr. Jordan is working closely with them and has agreed to serve on Piedmont’s staff as Executive Director of e4-12 Spanish. He is providing oversight for the launch of Piedmont’s second degree into Spanish. He recently said, “B.B. Warfield, renowned professor of theology at Princeton Seminary from 1887 to 1921, aptly stated, “knowledge of the Word is a powerful thing…. and so is a locomotive a powerful thing- provided it has stream in it.” After seeking to see these two indivisible elements combined in higher education for almost 50 years of ministry in the Spanish-speaking world, I am excited and convinced that Piedmont’s e4-12 Master of Arts in Ministry Degree in Spanish is for, “such a time as this”. The excitement we just witnessed in Argentina for our new e4-12 program in a promotional leadership conference resulted in over 1000 attendees. Not only were they clamoring to study with us, but we also had a moving meeting with Dr. Gerardo Zamora, the governor of Santiago del Estero, who was extremely supportive of this opportunity.  Our meeting with the governor resulted in promoting our e4-12 program and Piedmont in every newspaper and media venue possible. The enthusiasm of the conference was beyond words and our meetings were broadcast on radio and live-streamed through the Internet. Now, with wide-open doors in every Spanish country in the world for Piedmont, this voice beckons us to educate and plant disciple-making disciples. Thousands are within our reach with this new e4-12 opportunity! From the jungles of Ecuador to the teeming cities, my challenge is, let’s walk through this open door now and pursue this opportunity until He comes! As my spiritual father, Jack Wyrtzen said, ‘this is the Word seething with enthusiasm.’”

Piedmont’s ultimate international goal is to obey the clear command of our Lord Jesus in the Great Commission to “teach all nations.” Join us in prayer as we attempt to graduate key, gospel-multiplying, self-reproducing, highly-influential leaders from every nation on earth. There are some 200 countries on the planet, and we about halfway, having graduated leaders from around 100 nations. Please pray for this endeavor and consider giving substantially to help with this exciting vision.

“GivingTuesday” is a global generosity movement unleashing the power of people and organizations to transform their communities and the world on December 3, 2019 and every day. It was created in 2012 as a simple idea: a day that encourages people to do good. Over the past seven years, this idea has grown into a global movement that inspires hundreds of millions of people to give, collaborate, and celebrate generosity.” – givingtuesday.org